What is Roller Derby? 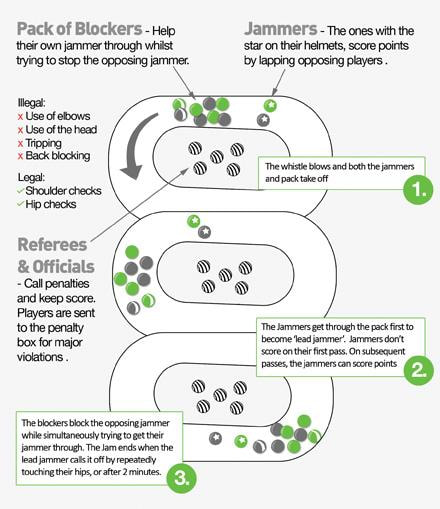 For those of you who don't know anything about roller derby, which is most people when they first start out (so don't worry) Roller Derby is a fast-paced, full contact sport played on quad skates on an oval track by two teams.

Both teams have a Jammer and four blockers.

Jammers score a point for every player they pass from the opposing team.
Blockers  have to help their jammer get through the pack whilst stopping the other team’s jammer.


A bout starts with the four blockers from each team skating together at the front in a tight pack. Both jammers race each other through the pack, but score no points on the first pass through.


The first jammer to break through the pack becomes the “lead jammer”, which means that they have the ability to call off that jam if they feel that the other jammer might score more points. If they don’t call off the jam, it will last for a full two minutes.


Each game consists of two 30-minute periods. At the end of this time, the team with the most points wins!

DERBY JARGON
Bout – a game
Jam – the game is made up of small sections called jams that either lasts 2 minutes or until the Lead Jammer calls it off
Jammer – the player who scores the points (identified by the star on their helmet)
Lead Jammer – the Jammer who broke through the pack legally first. They have the ability to call off a jam
Pivot – the only blocker who may become a Jammer during a jam (identified by the stripe on their helmet)
Blocker – four team mates who try and stop the opponents Jammer getting through
Pack – the largest group of blockers from both teams skating close together
Freshmeat – New skaters, we all start as freshmeat
NSO – Non Skating Official
Zebra – referee